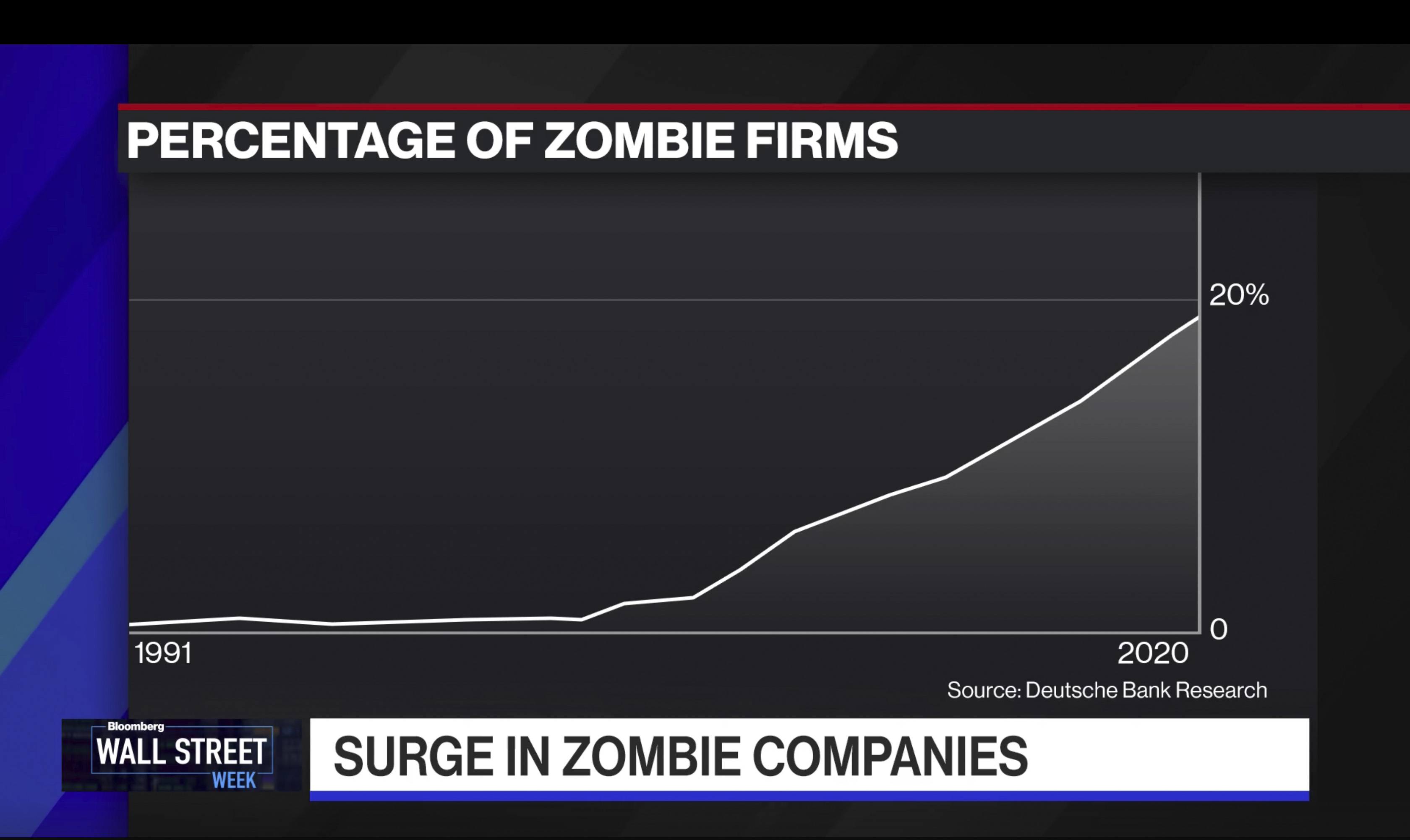 In economic theory, the zombie becomes a popular trope to discuss the seemingly artificial stimulation and tampering of the state with the free and allegedly efficient workings of the market. Said tampering, certain Nobel prize-awarded economic theories claim, disables the market’s “natural” process of weeding out dysfunctional companies and processes, resulting in a number of unhealthy, or rather undead, companies, returning from certain death (i.e. bancruptcy) to remain in the market. So, through market regulation, processes like creative destruction and thus the market’s efficiency are disturbed.

A zombie company usually is unable to operate profitably, i.e. reduce debt, raise its profit margin and grow, but is instead barely able to pay interest on its debt, let alone reduce the debt burden by its own powers. Also, it depends on low interest rates and other “artificial” stimuli introduced by the state to be able to borrow cheap money.

Interestingly, the figure of the zombie is somewhat of a blurry, shape-shifting image: It is used similarly from both a pro free market perspective and the advocates of tighter regulation or even critics of capitalism, describing both a state of the economy as well as labor relations its participants are subject to.

Note that the zombie is not the only occult creature populating econonic theory. Other metaphysical beings have been used to describe economic relations, as well, perhaps the most famous being Karl Marx’ sidenote on capital being like a vampire: “Capital is dead labor, which, vampire-like, lives only by sucking living labor, and lives the more, the more labor it sucks.” Following Antonio Gramsci, economic theory has seen the “time of monsters” and Marx, again, who seemed to have a fondness for metaphyiscal literary figures, did not only have werewolves, cannibals and sorcerers make appearances in his writings on economy, but also famously pointed to communism as being a spectre haunting Europe, and not least describing the evasive and ficticious character of finance itself as a “ghostly matter.”
“The market” itself appears as an animated, or bespirited creature in its ability to optimize its workings and purge all inhibitions if left to its own devices, manifesting—amongst many other places—in the Efficient Market Hypothesis.